Ami Koshimizu
Ajna is the protagonist of Indivisible, the daughter of Indr.

A fearless young girl with a rebellious streak, Ajna lived in Ashwat, a remote village in the forests of the Navar state. Her father, Indr, raised Ajna to be fair-minded and tough, and trained her in martial arts so that she might defend their home.

When her town is attacked by the army of the ruthless warlord Ravannavar, Ajna discovers a mysterious power - the ability to absorb certain individuals into her being.

Determined to confront Ravannavar and find out more about her strange new abilities, Ajna sets out on a globe-spanning quest that will reveal her true nature and much more.

Ajna is the sixth primary chakra according to Hindu tradition, also known as the "third-eye Chakra" and is the Sanskrit word for "command". Her outfit is based on the kebaya, which is the national costume of Indonesia but is also worn in many other Southeast Asian countries.

Her Heruka form is named after and based on a class of wrathful deities in Tibetan Buddhism, who represent "the embodiment of indivisible bliss and emptiness".

Prayer beads are always made using a specific number of beads, usually depending on the religion; in Ajna's case, they represent the number of Incarnations she can encounter.

Ajna is a brown-skinned young girl with sharp brown eyes and short dark brown hair. Her outfit consists of a tan blouse with a brown border around the collar with a blue dress and red sash. When exploring, Ajna hikes up her dress for more mobility, showing that she wears black shorts underneath. Red prayer beads with a white tassel rest on her head.

Ajna was discovered at the base of Mt. Sumeru by Indr and Bhadra, the couple taking the child into their care as their own and raising her in the village of Ashwat. She was nurtured and trained under Indr to master fortifying her defense and meditating in a training field for much of her life.

In sixteen years, she and her father enter another dispute over never learning of her mother or her life. After her father slips away, noticing plums of smoke from the village, Ajna rushes to find her father badly injured and her home roaring in flames, forced to face a Navarean soldier named Dhar. Amidst battle, she unintentionally pulls him into her Inner Realm, unable to pull him from her mind. Moved from her father's passing, she buries him, plotting to avenge him by seeking out Lord Ravannavar.

Ajna displays a wide variety of skills, capable of hand-to-hand combat as well as using an axe, spear, bow and kusarigama. She can also use her weapons to help traverse the environment, although it is limited to the axe, spear and bow in-game. 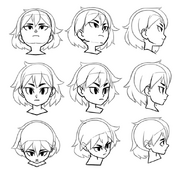 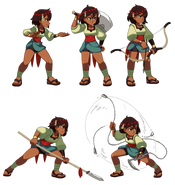 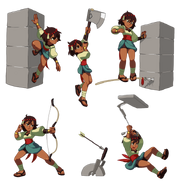 Using her weapons in the overworld

Baby Ajna and Roti by Kinucakes