Dhar is a Lieutenant of Ravannavar's army who accidentally becomes the first of Ajna's Incarnations.

The newest of Ravannavar’s Lieutenants, Dhar was recently promoted from Commander for his outstanding service. Dhar’s duty is to purge the heretics that Ravannavar believes stand in the way of world enlightenment, a brutal task he excels at.

This bloody campaign ultimately lead him to Ashwat, where he encountered Ajna. However, during their battle Ajna’s mysterious ability awakened, and Dhar unwillingly became the first “Incarnation” she absorbed.

Trapped within Ajna’s mind, Dhar reluctantly agrees to join Ajna on her quest for justice. But does he have ulterior motives?

Dhar was first depicted in the Indivisible trailer before being the first Incarnation revealed at $100,000 during the Indiegogo crowdfunding campaign, initially in greyscale before his colour scheme was first shown with the reveal of Yan. He was first made playable in the backer preview.

Dhar appears to be a cynical, self centered individual who is overly confident in his abilities. He is extremely loyal to Ravannavar, mentioning him very often and threatening Ajna regarding him.

He shows a large amount of hatred and disinterest towards Ajna and her group, although he does warm up to them as time passes.

He is really snobby at first, such as when he objects to Ginseng joining them, seeing the child as "extra baggage", but this only encourages Ajna to agree to take them along just to spite him.

Dhar is derived from the Burmese word dha, meaning "knife" or "blade", which is used to refer to a wide variety of Southeast Asian knives and swords; the sword Dhar carries highly resembles the Kachin dha. Additionally, Dhar is a Kashmiri surname that originates from the honorific given to a village head, strongman or a warlord of a jagir (feudal land).

Dharā is also a Hindu god of earth, whose name also means "support", reflecting Dhar's earthen powers and his role as both a follower of Ravannavar and Ajna's first Incarnation.

Dhar was one of many children taken in by Ravannavar due to his high amount of Iddhi. He was trained under the Navar State, following Ravannavar's orders and looked up to him as a father. He later became a new lieutenant of the Navar Army.

He leads an attack on Ashwat Village, on orders to kill Indr and everyone else. Ajna returns to the village set ablaze, and Dhar having fatally wounded Indr. They fight to a standstill, when in one final charge, Dhar is suddenly absorbed into Anja, to the shock of both of them. In the ensuing confusion, as they can both still hear each other, Ajna meditates in an attempt to concentrate and find him, only to discover herself in her Inner Realm, where Dhar has found himself. They attack each other once more but they only pass through each other.

After Ajna buries her father, she resolves to avenge him by killing Ravannavar and Dhar himself believes he can bring her back as a trophy. Encountering Vetala as Ajna begins to leave the village, the two of them discover that Dhar can materialize in the physical world once more under certain conditions, and they begrudgingly form a truce to battle together to make it to Ravannavar. He offers Ajna advice on travelling through the jungle that is Ashwat Forest to avoid his troops, who he believes have remained on the main roads.

Soon afterwards, Ajna encounters Razmi outside of her raided house, who ends up absorbed by Ajna as well. Razmi takes an instant dislike to Dhar and attempts to set him on fire, to no avail.

While Ajna travels the temple ruins, she comes across a dead Paidal soldier with her mother's axe. Dhar is shocked to see a soldier so far from the village, reluctant to believe that one of his troops would abandon their mission to stoop to looting and pillaging.

Dhar's Up Attack and Neutral Attack deal damage. His Down Attack is a charge, granting the player one charge per pip. The maximum amount of charges Dhar can hold is 12. This charge can be used to enhance Dhar's damage of the next attack. If the player has at least 3 charges, Dhar can use his Neutral Attack chain which breaks the enemy's defense. The charges do not affect the damage output of his Iddhi specials.

Dhar's basic damage also increases depending on how many times a Neutral Attack is chained instead of each attack being a single static number.

Dhar's splashscreen in the backer preview 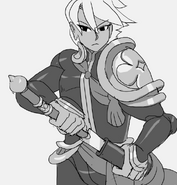 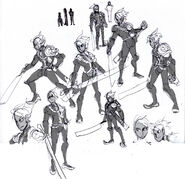 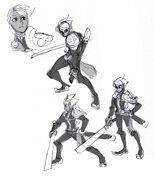 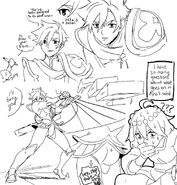 Sketches of Dhar by Juby