This article is a stub. You can help Indivisible Wiki by expanding it.

The golem originates from Jewish folklore, being a magically-animated figure made from clay or mud. In some tales, it was said to have emet (אמת, "truth" in Hebrew) written on its forehead; erasing the aleph (א) in emet, thus changing the inscription from "truth" to "death" (met מת, meaning "dead") would deactivate it.

The eye on its hand, especially when blocking, makes it resemble the hamsa, a palm-shaped protection amulet in North African and Middle Eastern cultures that also represents blessings, power and strength.

A silver variant appears in Iron Kingdom during the final act which inflicts contact damage on melee fighters (character health is reduced to 1 at most); however, it continues to take damage from ranged fighters who use physical projectiles and magical damage with no issue. 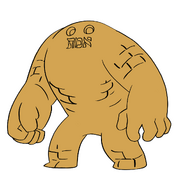 Add a photo to this gallery

Retrieved from "https://indivisible.fandom.com/wiki/Golem?oldid=7537"
Community content is available under CC-BY-SA unless otherwise noted.