Noriaki Sugiyama
Ren is an assassin under Mara's employ and can join Ajna as an optional Incarnation.

Ren's past is shrouded in mystery. Rumor has it that he arrived from a reclusive island nation some years ago, but anyone caught spreading the rumor is found dead shortly thereafter.

When he arrived, Ren quickly made a name for himself as the most deadly assassin. Seemingly lacking any kind of moral compass or value system, Ren will kill anyone if the price is right.

Ren is currently employed by Mara, helping the kingpin maintain his control of Tai Krung City by eliminating anyone that might stand up against him or try to move in on his Ohma operation. Frustrated and bored with the job, Ren hopes to meet someone that can sate his appetite for challenge, but until then he’s happy to use Mara’s sway to satisfy the appetites of the flesh.

Ren was designed by Brian Jun and was the 25th and final Incarnation to be revealed at $1,300,000 during the Indiegogo crowdfunding campaign.

Ren (蓮) is the on-reading of the Japanese word for "lotus". A flower that blooms unstained despite growing from mud, it is an ancient and polyvalent symbol in many Asian cultures. It is a name that reflects Ren's outward allure while contrasting his vicious personality.

Ajna falls into one of Ren's trap not long after arriving in Tai Krung City, whereupon he reveals himself and states that he is in Mara's employ. As Ajna ventures further into the city and is looking for a way into Mara's Den, she periodically encounters more traps, until she finally manages to catch up to Ren on one of the rooftops. He expresses an interest in the party (but only in the adults), intrigued by their various strengths (such as Baozhai) and pretty faces (such as Dhar), before Ajna finally chases him away with her spear in annoyance.

Ren is encountered once more within the club as one of Mara's bodyguards, and finally fights the party face-to-face.

When Ajna returns to Tai Krung City for the second time, Ren can again be found on one of the city rooftops. He challenges the party to another fight, and upon losing, explains that he has no place left to go now that Mara is dead and there is little use for an assassin in a world that is about to end. Ren convinces Ajna to take him along, both being "attracted to power" and eager to see Kala's face when she is defeated, and essentially forces his kusarigama on Ajna to use while he is out of battle.

His Resolution Quest reveals that Ren hails from a secluded island nation but fled to Tai Krung after failing his mission to assassinate a target, earning an automatic death sentence from his clan. He and Ajna visit Felicity in Port Maerifa, who informs Ren that she saw a woman leave the island with a lock of silver hair. Ren attempts to convince Ajna to run away, reluctant to get the party involved, as the woman is a witch and one of the three leaders of his clan, and she is able to track him down using anything important of his (hence the lock of hair). Ajna instead insists that they fight the witch to get her to leave them alone; Ren concedes, and reasons that the witch must have gone to Mara's Den.

Indeed, they find the Clan Witch in the ruined dining hall, where she makes her intentions to kill Ren clear. After besting her, the woman sheds her hood, revealing herself as Ren's mother. She continues to express disappointment that he had failed his mission due to mere feelings, although Ren argues that he "loved him" and only ran away from the decision he made in his selfishness. Attempts to threaten him with being targeted by the entire clan fail to cow him, as beating his mother, implied to be the strongest in their clan, has only assured Ren's confidence in his own abilities. Vexed, his mother disappears.

During the ending credits, he is seen being confronted by members of his former clan.

His weapon is a kusarigama, otherwise called a chain-sickle, modified to have an axe on the opposite end of the sickle. 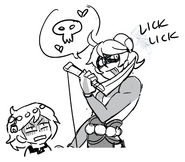