The Baz serves as the bouncer to Mara's Den. He is a backer character submitted by Woolie Madden.

The Baz, also known as "Zubaz" in other appearances, is based on "Bullfighter", a character concept that was initially drawn up for the roster Street Fighter II. Baz became something of a mascot for the Let's Play franchise Two Best Friends Play, first appearing in their spin-off series Fighterpedia on YouTube before making numerous other Best Friends-related appearances. He eventually started being included in indie games such as Divekick and Shovel Knight.

The Baz is blocking the entrance to Mara's Den and refuses to allow entry to Ajna due to the fact that she is not 21 and lacks ID to prove otherwise. This forces Ajna to find another way into the club.

After attuning to the Chakra Gate, if Ajna re-enters the club (again through the broken glass ceiling), the Baz will find her when she gets near the elevator and kick her out.

When Ajna revisits Mara's Den to confront Garuda Cruel, the Baz is no longer guarding the entrance. Instead, he is waiting on one of the floors inside, eager to fight "tough dudes". After his defeat, he accepts his loss gracefully and allows Ajna to pass, crying manly tears. 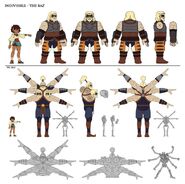